DHL celebrated the close of the 2021 Formula 1® season with the annual presentation of its two DHL “Fastest Awards”. This year’s DHL Fastest Lap Award champ is repeat-winner Lewis Hamilton (Mercedes), who tied Max Verstappen (Red Bull) with a total of six fastest laps, but took the 2021 title based on the number of #2 finishes in the Fastest Lap category.

Earning his sixth DHL Fastest Lap Award since 2014, Hamilton solidified his position atop the all-time Fastest Lap rankings. To present the Fastest Lap Award to Hamilton was Amna Al Qubaisi, the first Emirati female racing driver. Al Qubaisi, who has broken new ground and new records as an Arab female in motorsport, placed 19th overall in the 2021 F3 Asia Championship standings as a member of Team Abu Dhabi Racing by PREMA.

"It is of course an honor and thrill for me to present this highly coveted DHL Award to one of the world’s top racers."

“As an aspiring driver, it is of course an honor and thrill for me to present this highly coveted DHL Award to one of the world’s top racers,” said Al Qubaisi prior to the award ceremony. “It is also a tremendous honor to be here representing not only female drivers, but also the millions of female race fans and countless women working behind the scenes to make Formula championship racing happen. I want to thank DHL for acknowledging and celebrating this.” 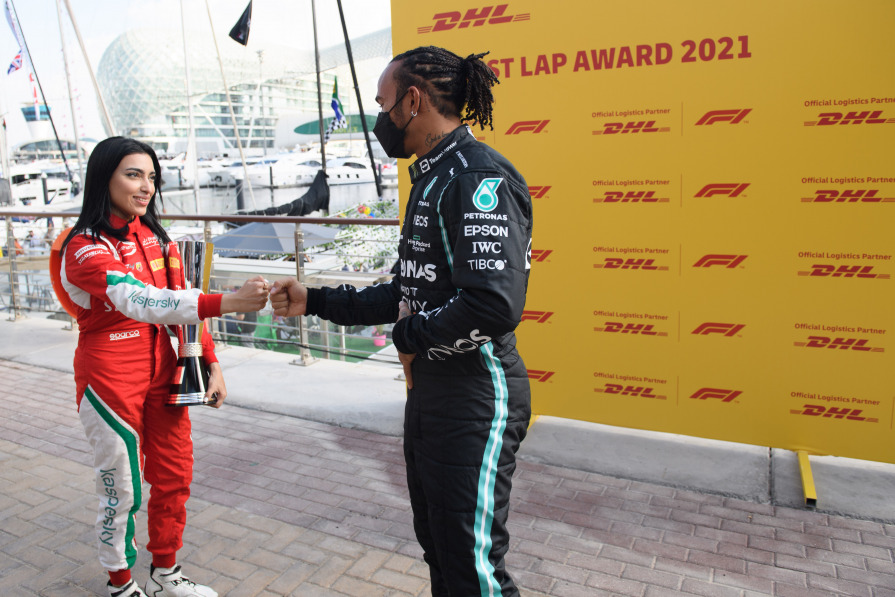 In 2021, Max Verstappen benefitted from the fastest pit stop eleven times, with teammate Sergio Perez enjoying the fastest stop two times. Team Red Bull was also the only team to post pit-stop times under two seconds, which it accomplished a total of five times this year. 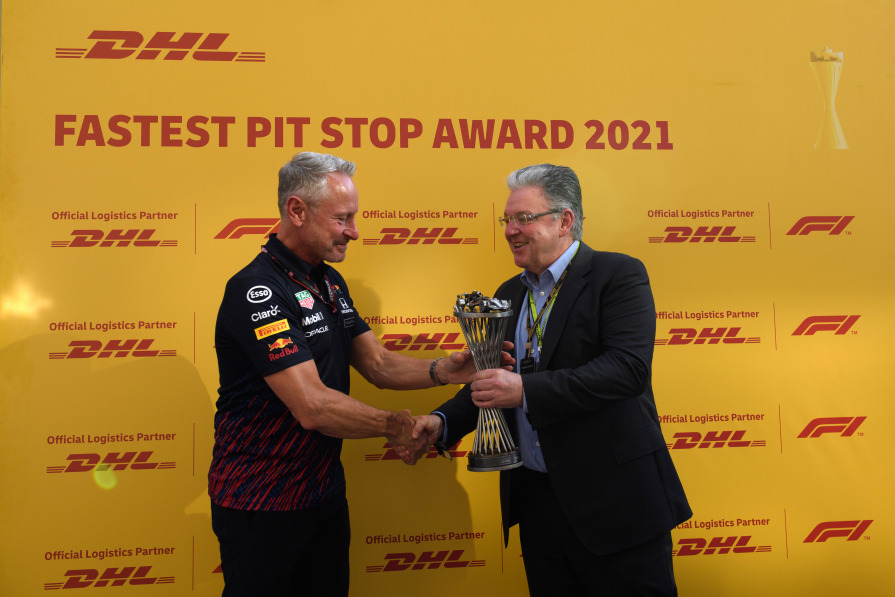 “Another model for speed, precision and clockwork reliability, Team Red Bull has now earned this distinction four years in a row,” said DHL Express CEO John Pearson. “Since introducing the DHL Fastest Pit Stop Award in 2015, we remain tremendously proud of what it celebrates: the unsung heroes behind the scenes and all the hard work, dedication and planning that goes into making those incredibly fast pit stops possible.”

“I’m delighted that the pit stop crew have won the DHL Fastest Pit Stop Award, they have been performing at the top of their game all year,” said Red Bull Racing Honda’s CEO and Team Principal Christian Horner.

"Another model for speed, precision and clockwork reliability, Team Red Bull has now earned this distinction four years in a row."

For this year’s DHL Fastest Pit Stop Award, Pearson presented Team Red Bull with a unique trophy made from upcycled scrap metal as a symbol of DHL’s commitment to sustainability.

“Deutsche Post DHL Group will be investing 7 billion euros in clean operations and climate-neutral logistics through 2030, which includes major investments in sustainable fuels. In the case of Formula 1, our longtime commitment to providing the fastest, most efficient and innovative motorsports logistics is now helping the championship to reduce its ecological footprint,” said Pearson. “We see ourselves as the sustainable choice in logistics and want this DHL sprit of sustainability to shine through in everything we do.” 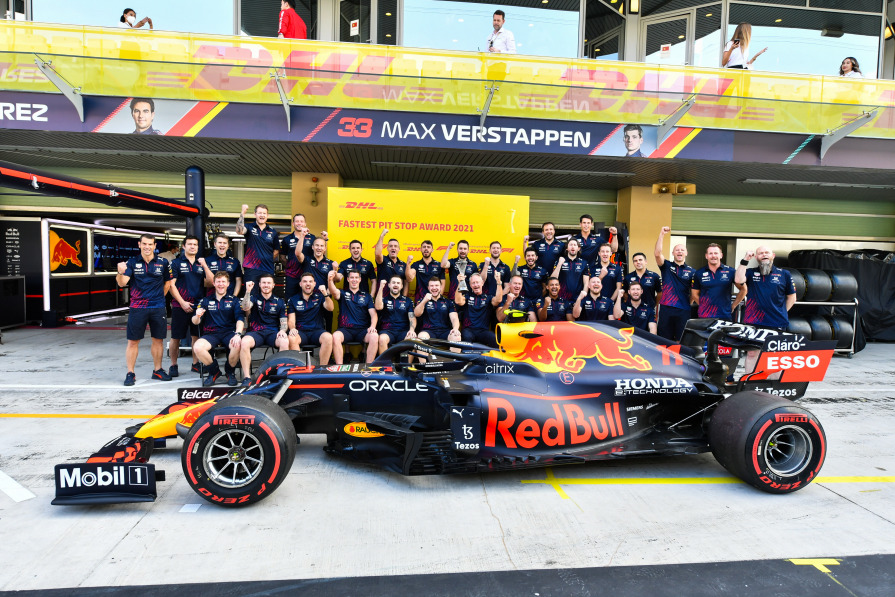 For Arjan Sissing, Head of Global Brand Marketing at Deutsche Post DHL Group, the presentation of the much-celebrated DHL Fastest awards is an opportunity to underscore DHL’s increased focus on sustainability.

“At DHL we have taken the lead in the logistics industry on sustainability – breaking ground with our environmental targets, including zero-emissions logistics by 2050, but also setting new standards in the area of social responsibility, including equal opportunity and diversity across our global workforce,” says Sissing. “Our work supporting Formula 1 is mostly behind the scenes. The Fastest Lap and Fastest Pit Stop awards are that brief moment when we step into the spotlight, and we wanted to take advantage of the opportunity to highlight our ever-growing commitment to environmental and social responsibility.”

"At DHL we have taken the lead in the logistics industry on sustainability."

With nearly 40 years of experience managing logistics for Formula 1®, DHL is focused today on helping Formula 1® reduce its carbon footprint and overall environmental impact. To this end, DHL is fitting its entire fleet of F1®-dedicated trucks with a GPS to monitor fuel consumption, select the most sustainable routes, and lower CO2 emissions. Other measures include the use of DHL’s new, fuel-efficient Boeing 777 aircraft, which reduce carbon emissions by 18% compared to traditional aircraft, and leveraging multi-modal transport solutions, including overland and ocean freight. At the Monaco Grand Prix in May of this year, DHL also joined Formula 1® in signing a sustainability pledge to reduce the use of single-use plastics at the track.

As Official Logistics Partner of Formula 1®, DHL transports up to 1,400 tons of highly sensitive freight – including cars, engines, fuel, broadcasting equipment, as well as marketing and hospitality materials – to over 20 races on five continents over the course of a nine-month season. The Abu Dhabi Grand Prix concludes an unprecedented 22-race 2021 calendar, which included four double-headers (races on two consecutive weekends) and two triple-headers. Adding to the challenge were the ongoing restrictions and safety requirements related to the Covid-19 pandemic. 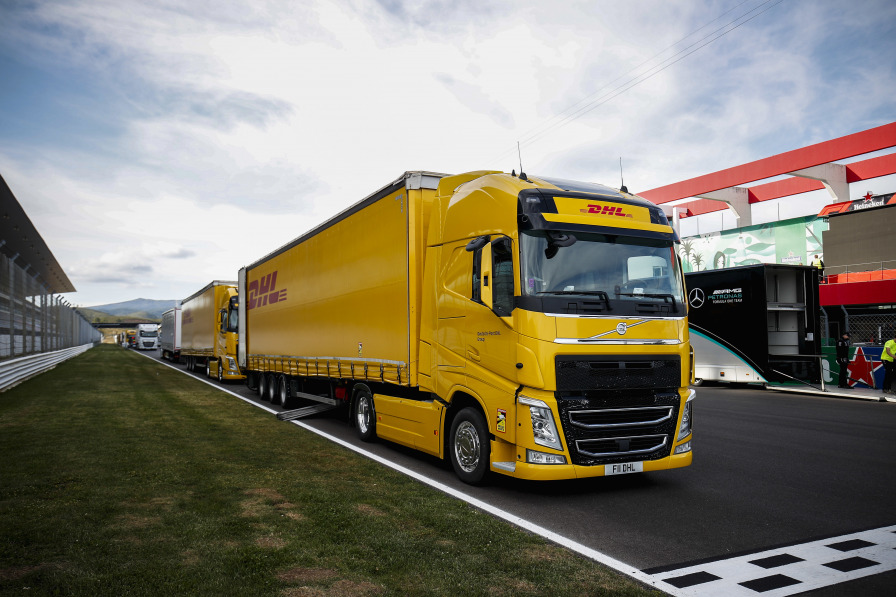 To help ensure the safety of DHL staff, F1® racing teams and fans during the ongoing pandemic, DHL developed stringent protocols for COVID testing and disinfecting the freight zone during each delivery. Brexit also brought significant logistics complications, since most of the teams are UK-based. Here, the experts at DHL Motorsports stepped in to handle the new ATA Carnet requirements, which allowed teams to move equipment in and out of the EU without paying taxes and duties.

DHL and Formula 1® look forward to another exciting race calendar in 2022, featuring a record-breaking 23 races and the first-ever Grand Prix in Miami.